An office-and-retail development at the Interstate 25/Colorado Boulevard interchange is going gourmet.

“It will be really convenient for tenants here at Colorado Center, as well as for commuters,” said Alyssa Teboda, the company’s marketing manager. “You can stop in and grab a cup of coffee or enjoy the outdoor patio, and then jump back on the light rail. It’ll really be a one-stop shop.”

Teboda said the food hall, slated to open by January, ultimately will house 10 restaurants, as well as a coffee shop and 40-foot bar. It also will feature a large outdoor patio. 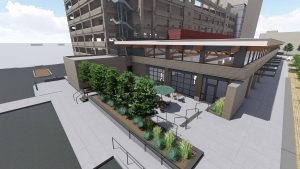 Teboda said the food hall is partially leased, but declined to discuss specific tenants or how many spaces remain. She did say the company is looking for original concepts.

“They’re all chef-driven and unique to the area,” she said. “There are both locally known and nationally known chefs who will fill gaps missing in the market around here.”

GH Phipps is the general contractor for the development, which was designed by Tryba Architects.

Food halls have popped up across Denver in recent years. Broadway Market is the latest to open, in the Golden Triangle. Others are planned along 38th Avenue in West Highland, and just outside city limits in the suburb of Edgewater.

The Colorado Center complex originally was developed in the late 1980s. Lincoln Property Co. acquired it in conjunction with Washington, D.C.-based ASB Capital Management in 2006, according to its website. The firm finished construction of a new office building — the Colorado Center’s first addition since 1999 — in 2017.

In addition to its office space — which has lured tenants such as health insurer Cigna, law firm Ogletree Deakins and Vectra Bank — the Colorado Center also houses the Regal United Artists IMAX movie theater  and a Dave & Buster’s.

Lincoln is discussing the possibility of adding residential units at the site, but hasn’t committed to doing so, Teboda said.